Start a Wiki
Tetsu Takano is a Japanese rock vocalist. He started his career in 1991 in the visual kei scene, starting with the short-lived band, Ner-vous. He then went on to become the first vocalist of the famed band, Malice Mizer, but then departed in 1994 due to musical differences. Since then, he has been involved in various non-visual bands later in his career. 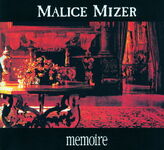 Retrieved from "https://visualkei.fandom.com/wiki/Tetsu_Takano?oldid=30615"
Community content is available under CC-BY-SA unless otherwise noted.